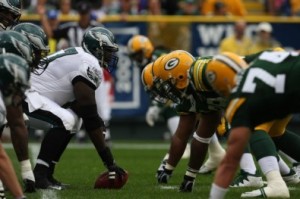 I, for one, was happy to see the Philadelphia Eagles lose to the Green Bay Packers. I was also happy to see the New Orleans Saints lose. Both teams present challenges for the Falcons and I am not ashamed to say I would rather play teams I feel we have a good chance of beating. As you all know, the Eagles gave us our most lopsided loss of the season this year and that always scares me. But, the main reason I did not want the Eagles to win is because deep down inside I do not want Michael Vick to succeed elsewhere.

I still have my Vick Falcons jersey in my closet. I even occasionally wear it. I feel his punishment for his crime was too severe and I feel Roger Goodell’s extra game suspensions after he got out of jail were unwarranted considering he has suspended during the time of his stay in prison and lost 2 years of salary and playing time. I am happy a team picked him up and I am glad he got a well deserved second chance and more importantly, that he made the most of it. I definitely agree with Arthur Blank in that we did not want him back as a Falcon. I love Matty Ice and I’m glad we drafted him.

With that said, I hate that he says he didn’t practice or study hard when he was with the Atlanta Falcons. We were one holding call away from being in the Superbowl even with your poor preparation. Imagine how that team would have done had Vick put in the time and effort. When Vick was with us, the Atlanta Falcons, he would always make the amazing happen but often times he would always fall a penny short. Same was true at Virginia Tech. Watching yesterday’s game against the Green Bay Packers, I was hoping this was not the time when he had finally turned the corner and not only could bring them back, but also make that last second play and lead them to victory. I wanted the Vick who holds the outstretched ball carelessly with one hand as he jumped back and forth between slower defenders only to fumble the ball when a fat lineman merely swiped his pinky finger on the ball. Fortunately, he never turned the corner. His greed continues to be his downfall, he went for gold in the endzone and underthrew it. Game over. This is the Vick we knew, and now this is the Vick the Eagles will get to know. I hope he gets the MVP award, he does deserve it. I also hope he gets a nice large contract and pays back Arthur Blank the money he owes. Arthur Blank deserves that.

Now we focus on the Packers.