Florida steals Will Muschamp from Texas 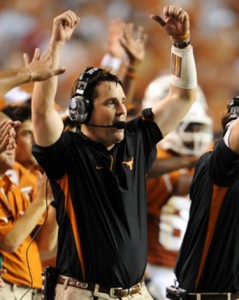 As you probably know, I am fan of UGA first, the University of Michigan, then the University of Texas when it comes to colleges which is also the path where I have lived my life. When a team like loses somebody I like, I always hope that the pilfering is being done by another team I like. At a minimum, I would like the pilfering to be done by a team I have no opinion on.

I thought Will Muschamp was staying in Texas. A 4-year player for Georgia and a great defensive coach and having been told he was the coach in waiting for Texas, a school that is the most profitable football school in the nation.

First off, he is everything Georgia needs. He not only would have had Georgia players dance in the end zone, he would have done it again the next year and not apologized to anyone. He is fiery and he is a defensive minded guy.

Frankly I am shocked. While Georgia goes backwards with Mark Richt, Florida loses one of the best coaches only to replace with possibly the best available replacement. I worry Georgia is going to sit back and keep Richt while we continue to lose recruits to all the neighboring states.

It is time to make changes and we have to be bold. I’m sure plenty of the other top defensive coaches would love to become a head coach and perhaps that is what we need to do. I would even take Todd Grantham as coach. I only wish he did not apologize for giving the choke sign to the Florida kicker.