Dawgs out, U Texas out, U of michigan basketball out

This whole weekend was depressing. All of these three teams ended their seasons in a manner that represented a microcosm of the regular season. 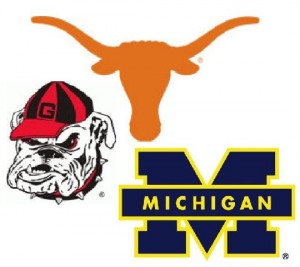 Georgia. Down right depressing. they dominated the first half only to end up tied at the half. They relied heavily on outside shooting in the second half, got a bogus goal tending call, had an extra 1.5 seconds run off the clock before the last Washington free throws and missed a disparate shot.

It looked like Mark Fox was arguing about the time and I do not understand why the referees could not look at the monitor to see how much time should have been on the clock. An extra 1.5 seconds would have been valuable.

Much like the whole season, we followed the same pattern, a lead early, shoot jumpers in the 2nd half, down late, and a rally that comes up just short. Frustrating, and we could have won the round after that as well.

Michigan. Another microcosm of the season. Had a chance at the end but rushed the shot and missed it. I would tried for the victory with a three and I would have had Hardaway take the shot. He was the one who brought us back in a game that looked like it had gotten away.

The whole season was the same way: missed opportunities, near victories, playing uninspired ball at times only to have a close game slip away.

Texas. The most depressing of the lot. They look uninspired all game. They miraculously clawed their way back in the game thanks to Brown and even took a 2 point lead and got a defensive stop with about 10 seconds left. For some odd reason, Texas takes a time out. Then we get a bogus 5 second count that was actually 4 seconds and the replays show it. The referee never even counted to 5. It is as if he refused to accept our timeout. . We foul a guy who makes a circus shot.

Brown drives the lane and takes a forearm to the chest and a swat from behind. Texas gets the rebound and clearly gets hammered only to have the refs decide, without review that the clock had already expired before the foul and they run off. No review. It was a travesty.

I am out of teams in this tournament. I may not watch anymore as I think I need a mental break.