The story behind the name Hibah

How We Came Up With the Name

As is the rule for my children, we want names that are two syllables or less, easy to pronounce, and Muslim names.

We whittled down a list of boys names and girls names since we did not know the gender before the delivery.   The delivery came early and the only thing we had ready was the name. No car seat, crib, diapers, but we did have a name ready.

There was nothing unique or any special story behind the name, we just liked the way it sounded and thought it was easy enough to pronounce.

Meanings and Pronunciation and Variants

* It is pronounced “Hi” like hit and “bah” like bug.
* It is an Arabic word that means: gift from God.
* Hibah has one variant form: Hiba 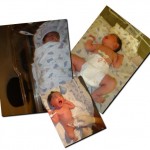 * Hibah Sherif Frisina is the name of the main of a television show editor with credits such as Law & Order: Criminal Intent, Crossing Jordan, and many more.

…..One in every 702,203 Americans are named as HIBAH and popularity of name HIBAH is 1.42 people per million. If we compare the popularity statistics of HIBAH to USA’s population statistics, we can estimate that as of March.19.2009 03:05 there are 436 people named as HIBAH in the United States and the number of HIBAH‘s are increasing by 4 people every year.