The Birth of Hibah Fatteh 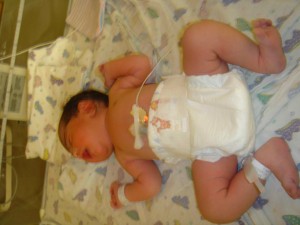 Hibah was born today on September 15, 2004 in Austin, Texas. She was 18.75 ” and 5 lbs 12 ounces. She was born one month early and after a day of despair, Hibah was born in an emergency C section. Fortunately, she was 100% healthy and breathing on her own.

I’ll start from the night before to give you the whole story:

Before going to bed I printed off the list of things I needed to get before the delivery, a list which included a baby seat, bottles, diapers, wipes, etc. Tannu was already asleep and off to bed I went.

Tannu woke up early. She was freezing, you could feel her heart beat, and she was convulsing. We did not know what was happening. We call her doctor’s office who told us to either go to the emergency room where we might have to wait a few hours or wait until their offices opened at 8am and have on of the doctors in the group see her. So we waited. They had a rookie nurse try to find the fetal heartbeat and she did not find anything so we thought it was over. Fortunately, she was just incompetent. The main doctor came in and found the heartbeat right away. She was concerned though so she called the hospital and told them to admit Tannu.

At the hospital, after running some tests, they determined that Tannu had an infection. Since they were not sure if the baby also had the infection, since it was only one month until term, they decided to induce labor since it is easier to treat the baby separately. So they put monitors on Tannu and began the process of inducing labor. They told us they would try to avoid a C section since you always want to avoid surgery if possible. They anticipated the delivery occurring around 11pm that night. 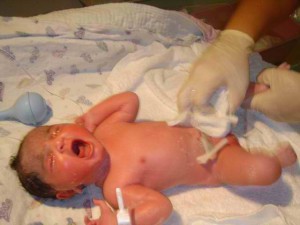 The fetal heartbeat was being monitored and was normal so since we had been in the hospital for about 12 hours I decided to go home to grab a few things such as a change of clothes. Fortunately our house was only a 5 minute drive from the hospital. Right after getting home, I got a call from my mother saying to come back right away. I rushed back and they gave me scrubs and told me they were doing an emergency C-section because of fetal duress.

Very quickly, they pulled out Hibah, and thank God, she was crying and breathing, and was 100% healthy. She did not have any infection but the umbilical cord was wrapped around her neck and that is what was causing the fetal duress.

Tannu also was doing very well on the antibiotics and we were thankful that everybody was healthy and excited to have Hibah be part of our family.

For more photos, click the images below to view them:.