The Spurs with Manu

I make this argument everyday and I get blasted everyday for it: Emanuel Ginobili is one of the top 5 players in the NBA. 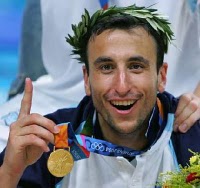 People start off with a laugh and then after realizing I am serious, they start rattling off people they feel are better and why. They tell me how doesn’t even start and relies on Tim Duncan. Bollocks, I say to all of them. I think Timmy relies on him and if you really think Manu is 2nd string, I know you have never watched a Spurs game in your life. Manu is part of the 2nd unit because he can carry the 2nd unit on his own which makes the Spurs lethal since Timmy and Parker carry the first unit.

I’ll make the argument here again and although the last couple years he has been injured, I think this actually strengthens my case.

First off, I’ll tell you who I think is better: Kobe, LeBron, Dwade. That’s it. Obviously even the deaf have heard of these three. What the 3 of these have in common is that they can take over a game at any time and it is usually the 4th quarter and will kill you from distance or penetration and there is nothing the defense can do but watch. When they drive if they miss, they’ll get fouled. Manu, same thing. He will take a step back 3 at will and can penetrate at will with such awkward looking motions that I think it is even more insulting to the defense. Parker is usually a no show in the 4th and Timmy D is often easily stopped with tall lengthy defenders but Manu cannot be covered.

The argument that the Spurs are old and that is why they lost last year and are probably going to this year doesn’t fly. Manu was hurt in the playoffs and most of this year and that is why they will lose. Sure they have one of the oldest rosters but I find it ridiculous to say they got old right when Manu got injured. These are the same people who said the stock market would crash and have been for the last 5 years. Well sure, you are right, it has crashed but you were 4 years off. People have been saying the Spurs are old for several years.

When your star goes down, the rest of the team looks ordinary. True leaders make the others look and play better, this is what Manu does. Manu has been out, and the Spurs all of sudden look old.

Who do you want with the ball for the last second shot. After Kobe, and Dwade, I take Manu even ahead of LeBron. LeBron has time to pass him but so far Lebron hasn’t shown his clutch shooting has truly carried over into the postseason. Kobe, Dwade and Manu have rings to show their talent. There are so many ways Manu can beat you, he can’t be stopped.

The other argument is that without Timmy, he wouldn’t have a single ring. This is perhaps true but… what about Jordan without Pippen, Kobe without Shaq, Magic without Kareem, Dwade without Shaq, Larry Legend without McHale, and the list goes on.

Defense: Now, Manu is never a candidate for Defensive Player of the Year but if you watch the end of any close game, he is the one he ends up with the loose ball, the key tip, the key rebound, or the key steal. Obviously the one blemish is against the Mavericks in Game 7 a couple years ago but that foul on Nowitski didn’t lose the game, it sent the game into overtime.

Manu has the most to overcome. There was an article on ESPN a couple years ago where they had interviews with anonymous players around the NBA who said they hated Manu because he played such an aggressive style unlike most international players who have more of a finesse player. So, obviously he will never get any love from the majority of peers and as a result will never get the recognition he deserves as one of the best of his generation.

His resume cant be touched by anybody: Euroleague Champion. NBA Champion. Olympic gold medalist. You cannot find this kind of champion at any level.