The difference between Garnett and Marbury 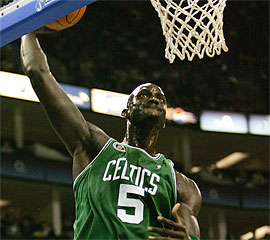 So you want to know the difference between Kevin Garnett and Stephon Marbury?

Short Answer: Nothing, they are the same person.

Long Answer: Not much and and I’ll tell you why.

For one, I, for the life of me, cannot understand why the NBA has chosen Garnett as their spokesperson for dedication, hardwork, and being a true champion. Here is what K.G. really is and then I’ll stack it up against Marbury and let you decide:

1. Could not cut obtain the minimal SAT score to play collegiate so he opted for the NBA instead of sitting out a year. I don’t blame him on this one. College is meant to prepare you to get a job and if you have a $5 million dollar job waiting, what does college do for you. So, I praise him for this move.

2. He took the TWolves to the playoffs and made them a decent team.

3. He had a good team with Latrell Sprewell, Sam Cassell, Wally Szczerbiak and Troy Hudson. Hudson was the one who carried them in the crucial playoff series against the Lakers and it was Garnett who could not never make that critical shot or stop to get his team over the hump. Troy Hudson, if anyone, lead the team. In my eyes, that is when it became apparent he was never a team leader. He was an amazing #2 on a squad a la Scottie Pippen, but could never be one to lead his team to glory.

4. A few years later, with a bloated salary cap partly due to his salary, a half-hearted Garnett claims to be injured and wants out of Minnesota. Signs of a leader, I do not see it. In this case, the owner

5. The owner grants his wish and trades him to Boston for Al Jefferson and change. The owner openly states Garnett tanked it in Minnesota which seemed to be obvious to the common outsider.

6. In the clutch, when shots are needed, Pierce is the man and the one everybody knows is the leader of the team. This relieves the pressure off Garnett to play a more comfortable pressureless 2nd fiddle. The celtics thrive and win a championship. 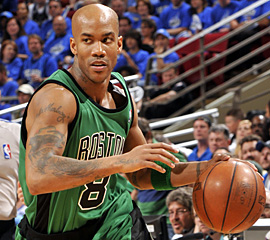 Compare this to Stephon Marbury:

1. Marbury briefly went to Georgia Tech and had a decent, albeit short, career.

2. Played with Garnett in Minnesota for a couple years and got in a dispute with management over his role. Perhaps he realized Garnett was not a leader early on and perhaps he thought he was one (he would be wrong on the latter).

3. Traded a couple times from New Jersey to Phoenix in exchange for all stars such as Jason Kidd who was unhappy in Phoenix and put up decent numbers and lead his team to the playoffs only to get ousted early.

4. Traded to New York in 2004. Fought with Larry Brown, in love with Isiah Thomas until they feuded, and recently feuded with Mike D’Antoni. It seems a lot of people were feuding with Larry Brown everywhere he goes and Isiah appears to be a certified nut. D’Antoni walked into this mess so its hard to know what was actually happening although I suspect both parties can share some blame. Needless to say, Marbury is no leader and a crybaby, does this sound familiar.

5. So, Marbury is eventually released and signs a minimum contract with the Celtics along side his other baby friend, KG. Perhaps they will complete each other.

Ultimately, I see no difference in their paths to the Celtics. Both are hard headed decent basketball players who will exhibit less effort if things do not go their way. Do not get me wrong, I think Garnett has more talent and finding an agile 6’11” player is hard to find so if you ask me to pick one, I take KG on my team but I’m only pointing out how both ended up on the celtics in the same way taking the same crying route yet the media has chosen to worship one and vilify the other.

Ever wear the Starbury basketball shoes. I have 2 pairs and cried when I heard Steve & Barry’s went belly up. They are an amazing pair of shoes and unlike other athletes who have cheap shoes, he actually wears his during games which convinced me they must be of decent quality. I got each pair for $9.99 so I know he’s not getting filthy rich off these shoes and the clothing so at least I know he is not 100% selfish.

That’s it for today’s sports rant.