NBA ref admits he blew call on inadvertent whistle. I ask why? 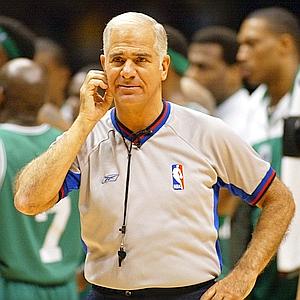 Why did Bennett Salvatore feel the need to review and comment specifically about only this call. Granted, it was an odd sequence but there were quite a few non calls going against Atlanta which he did not comment on.  I agree it is rare to see an inadvertent whistle call but it was not clear that it was a foul. Look closely and you see both Derrick Rose and Jamal Crawford initially try to avoid contact, backing away from each other. Crawford lands, at which point Rose jumps into him. That is a no call. If Crawford had been in the air when Rose jumped into him I could see the argument but he had already landed and was stationary so at best, you could argue a no call and if anything could have been called (but never would be), it should have been a charge.

Now, what I do not get is why Salvatore chose to make comments about this call specifically and not the many other calls that were blown. How about the moving screen on that same play where Korver was never set, picks of Teague and keeps plowing him off Rose?  Boozer continually sets moving screens throughout the game that are not called.  Did Salvatore think Josh Smith fell on his back by himself?  Feed by Josh Smith to Horford leads to Rose swipe of Horford‘s arm and push in the back. Horf gets the dunk with no freebie.  Joe Johnson on his fast break was body checked by Rose, no call; J Smith across the lane hacked, no call; Crawford on a floater hacked, no call; J Smith on his rebound dribble up court and feed to Horford on the alley-oop where Noah fouled J Smith. For every defensive 3 second they call, they are letting two go, you can watch either Boozer or Noah sit in the lane on defense on almost every possession. Last but not least, let us not forget that if the offensive player plows into the defense, it is a not a foul every time even if you are the MVP.  Mr. Salvatore, any comments or regrets about these calls and no calls. Why did you only watch that replay.  I only hope the refs do not have a make up game now and foul us out of game 5.