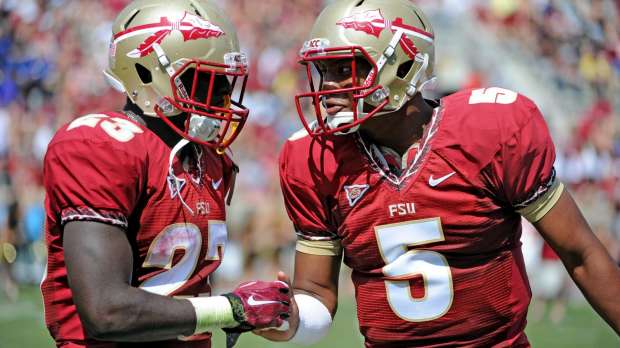 I have yet to hear that there is any evidence that links Gurley to a payment. I have only heard that there is a video of Gurley signing somethings that does NOT show any type of payment. I am willing to bet the payment, if there was one, was in cash, with no receipt which means it will never get proven. I also imagine that Winston got paid cash and his will also never get proven.

Worse yet was the article that came out on ajc.com (the Atlanta Journal Constitution) that says the the UGA Athletic Department has been so overwhelmed with other infraction issues/hearings that they have not even submitted paperwork to the NCAA for a ruling.
What I take from this is the following: Richt talks about family and the players being part of a family and everyone talks about high moral character. Apparently though, this Richt family will abandon a family member at the first mention of a transgression. Forgot whether you actually did anything or not. Georgia will punish before investigating and will take their own sweet time investigating. Nothing like conditional love.

I praise Florida State for the way they have handled their situation. The coach steps forward and backs his player. Evidence mounts by the day. The coach reaffirms the innocence of his player. The coach’s job is to sink with the ship, not be the first one off (Mr Richt) to safety and the coach is supposed to credit the players for victory and let his players enjoy victory when they succeed.

This is eerily similar to when the AD pulled the Georgia basketball team from the SEC tournament when the ESPN report came out about Harrick. We had a great team that year that would have made a deep run in the NCAA tourney. Ultimately, it appeared from what I could tell, there were some minimal infractions. We SHOULD have played and dealt with the fallout later. UGA never defended their own, they dropped them.

Mr Richt I feel is a coward. He should have stepped forward and defended Gurley. He has said nothing. Gurley flounders alone. A young man who probably did little to nothing wrong, has been shamed by family. I am losing faith in the UGA family, a shameless university.