It’s all in the spin: Kobe Bryant black mamba vs Dwight Howard 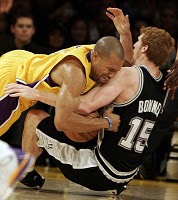 Derek Fisher throws a high elbow that he lines up and follows through with. First comment from Doug Collins: “This is a tough guy, one of the toughest in the league.” He went to talk about his veteran savvy. Basically he was justifying Fisher‘s cheapshot and almost glamorizing it. If the NBA follows their own rules, he should be out for the next game since he went high and it was premeditated. The part that amuses me is that Doug Collins should his hand. If it was say, Josh Smith, the first comment would have been: This guy just doesn’t get it. This type of play does not belong in basketball. But since it was Fischer, no such comment. Of course the NBA will not suspend him, god forbid they hurt the Lakers.

Later on, Kobe elbows Ron Artest in the neck. A couple funny things on this one. First off, a foul on Artest was called. Second, Artest should have gotten a technical but it seemed odd that he was thrown out considering he did not challenge Kobe to a fight. Recall the Rondo throw of Hinrich. Hinrich got up and went after Rondo and challenged him to a fight. Hinrich did not get thrown out and I am not sure on this, but I do not think he even got a foul. This was similar to the Dwight Howard elbow. Kobe should be suspended but of course, that will not happen because the NBA cannot afford to upset Kobe and lose revenue. I thought they could use instant replay for fighting issues so I am not sure why they did not for this.

This article implies Fisher just accidentally ran into Luis Scola and that there was no visible evidence of a Kobe elbow, just Artest saying it was so. More funny reading.

The ESPN article is good too. If I just read this article I would think Fisher was an innocent bystander in the collision and took a hit just as hard as gave. Is it so hard to say Artest was upset after getting an elbow from Kobe in the neck instead of pretending that we don’t know if there was an elbow and we just know that is what Artest thinks happened.

Doug Collins later in the 4th talked about how one of the Lakers did a good job of getting out of the circle and taking a charge. It was a key moment in the game that I think would have cut it to 6. As he was saying and presumably watching the replay, it showed he was not close to being outside the circle and it was a bad call. Collins perhaps tipping his hand again.

For fun, lets look at a couple recent events to really see the inconsistency in the Stu Jackson and the NBA’s punishment system:

1. Horry’s hipcheck of Nash vs Rondo’s throw of Heinrich.

I personally think Rondo’s throw was worse because you can do more damage throwing somebody into a table WWE style vs hipchecking them. Like idiots Amare and somebody else ran straight to Horry. These were 2 separate incidences but running off the bench warrants an automatic 1 game suspension but was Horry’s hipcheck worth 2 games. I thought it was worth 1 but I think Stu felt pressure to make it 2. But if the Horry hipcheck was 2, shouldn’t Rondo’s WWE throw be worth at least 1. I would say 2 games if you want to come close to being consistent. Celtic bias perhaps, read on.

2. Garnett shoves a ref aside against Atlanta last year in Round 1 as he tries to confront an Atlanta player. Should be an automatic suspension but Stu ignores it.

3. When is the last time LeBron had a foul called on him?

Rank these various offenses and then rank the penalties the look at the teams benefiting.