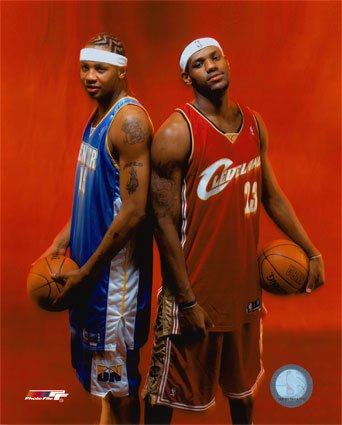 Here is what I see:

I give him one big positive. He has shown he can win at some level. He lead Syracuse to a national championship in his rookie and only season there. That was impressive. Since then, he has shown to be a diva that lacks the killer instinct who is more worried about creating an impression than letting his play create it.

I consider LeBron to one of the elite. The guy is a man child and now that his outside shot has been developed, is an impossible cover. Plus, he has shown he can carry his team with a barely respectable supporting cast, all the way to the finals.

Carmelo has shown that he will pout and refuse to go back into a game when he feels he should not have to go back in. Then will only apologize after his mother tells him to do so. He was involved in some underground video promoting something like violence against police. He refuses to come out of games when he is told to. He is not and has not even been the best person in Denver. I think Iverson was better and clearly Chauncey is much better. Lets not also forget Carmelo is the one who insults his teammates while the series is still going on (against the Spurs) and also is the one who laid a cheap shot on Manu during a blow out in the final game of the series. Why on earth was he the one taking the last shot again New Orleans yesterday?

Essentially, Carmelo is half right, he is like LeBron in that he is child while LeBron is man child. I put Carmelo in that group of 2nd tier stars like Scottie Pippen and Chris Bosh. A person who cannot be a leader at this level but is a great #2 on a squad which is why Denver is so good right now.