Atlanta Hawks Stink, Melo is not that good, and Williams is better 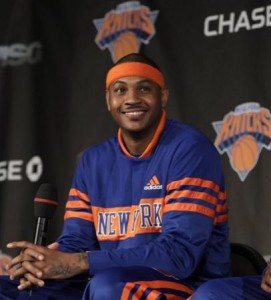 As you know, I think Carmelo Anthony is one of the most overrated players in the NBA plus I think he is a drama queen. I find it laughable, that if the rumor is true that Isiah Thomas orchestrated the trade, that an owner would still rely on a person who was notorious for overpaying for players who thought they were better than they actually were. So New York gave up their whole team except for Amare Stoudamire. First off, I think this is an amazing tandem but, I think they are both second in command types. What I mean is that they are both Pippens with no Jordan, they are both Gausols with no Kobe, they are both LeBron James with no Dwyane Wade (a quick swipe at LBJ never hurts). Plus both are very childish volatile types who will quit when the going gets rough. The wildcard is Chauncey Billups who, despite his declining play, is a clutch player with a championship. Now for most smart players, I think Chauncey would serve as a mentor and a calming influence and clubhouse leader but I do not think Carmelo would defer to an older guy when Carmelo thinks so highly of himself.

So when the going gets rough,I anticipate a lot of complaining and magnify that with a New York media frenzy and I think we have a recipe for disaster. Carmelo will get his money, which is his primary concern, and the New York Knicks will make the playoffs but they will not beat any of the top 3 teams in the East. They will, however, blame somebody or something else for their losing. I am not sure why New York did not just wait until the end of the season and get him for free, it does not make much sense to me but Isiah never did nor has Dolan.

The better/smarter trade happened today was the trade for D Williams. The Russian billionaire I think wised up after begging for Carmelo and got D Williams for a much better price. The could-have-been Deron Williams will be a great centerpiece for New Jersey.

As expected, the Hawks have watched patiently on the sideline. Our amazing broke owners will probably figure out a way to blame the fans for they’re not trading anybody for anything and will no doubt sue somebody for this. By the way, what happened to our revolutionary offense that was too complicated to describe? It netted us 80 points. It was nice to see we contributed to the the Carmelo trade in that Sheldon Williams was part of the trade. The guy we promised to draft even though nobody was going to draft him anywhere near our spot in the draft. I am not sure how the Landlord is still around but I also do not understand how he was dating (or was/is he married) to an attractive basketball player. I have much to learn.