Hawks still stink and so does Carmelo Anthony basketball 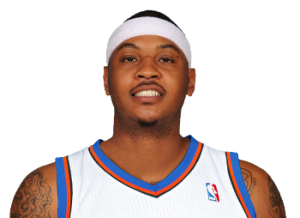 I think Atlanta deserves Carmelo. As I have commented in the past, Carmelo is a pure stat stuffer who is one of the most overrated players in basketball. A pouty player with a low basketball IQ. Yesterday’s game 2 vs the New York Knicks was a perfect example of everything I have been saying. The guy was scoring with 2 and 3 people covering him but when push came to shove in the last minute of the game, he was passing the ball off to Jeffries. I do not think you would ever see Kobe do that. Although lately, I think you probably would see LeBron do that since he is now 2nd fiddle to Wade. Then to top it off, he basically said he was too tired to chase West with 4 seconds left to give them a real chance to tie it up. I am not sure why West did not keep going towards his own hoop because he did not need to clear the half court line.

The best part was the loser talk afterwards about how great he played. He seemed happy and I am 99% sure he was. Sure he did not win, but look at his stat line. 100% loser talk. Ah, and this is the Hawks. You could tell early they were not playing to win early on. They could not get a rebound, a stagnant offense, Drew’s stupid 2 fouls and you are out rule. Why do we have Horford and Smith on the Wings during our offensive sets, shouldn’t they be closer to the hoop. Why isn’t Smith taking Turk to the hoop on every play. We never play to our strengths, we also put square pegs in round holes. If Turk is on Smith, all the plays should go through Smith who should easily get to the hole. If he gets doubled, Hinrich or JJ should be open on the wings. Whoever Jameer Nelson is covering should get the ball because the guy is short. Post him up and force their hand.

We had that amazing comeback in the 4th but as all losers do, it fell short. We could not get the lose ball down 2 and then we end up with a long fadeaway 2 pointer miss by Horford, a play that I hope has never been designed.

Why did Drew refrain from complaining about the foul call discrepancy afterwards. Every good coach does. I do not think the refs did a bad job but why not complain. My guess is that the Spirit will not pay the fine and Drew, being the lowest paid coach, cannot afford it. Plus, Drew has no idea about what he is doing.

And lastly, talking about square pegs in round holes. Jordan Crawford. Perhaps we should trust players instead of giving a quick hook to the youngsters. I thought Drew said he was not Woody part 2. Crawford was lights out for Washington after the trade including a triple double and a game tying and game winning shot in a different game.

Game 3 will tell all. Do we have Woody 2.0 where the players decide what they and how they want to play and we do the same thing again without any changes hoping for a different result or do we have a coach with a plan, who knows how to make adjustments who will catch Orlando off guard.