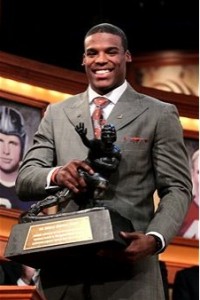 I wholeheartedly agree the Cam Newton is the best player and deserves the Heisman trophy. I cannot fault any of the voters who voted for him. He is a dynamic runner, a solid passer, and sheds tacklers like a running back. When I watched him pick apart Georgia, it was impressive and to see him shred tacklers so easy when he played the gamecocks, it was amazing but…

I, for the life of me, do not see why the media is rallying about Cam Newton as if he is a victim. You have prominent writers like Dan Wetzel who writes for Yahoo which you can see here which is an article that is sympathetic towards to Cam Newton and his family. I am going to address some of the issues he brings up:

1.  First off, he broke the rules. The NCAA determined he broke the rules. One can make an argument that it is a bad rule but regardless of your stance on the rules, it is a rule. Breaking a rule and merely stating it as a bad rule is like killing somebody and saying they deserved. If you kill a mass murderer when you see him on the street, you’ll get a lot of supporters but you’ll also go to jail.

2.  The argument that athletes play for free is also bogus. Ask any student who has student loans in excess of $100,000 when they graduate from tuition alone after having already paid for all their housing, food, etc. Ask the students who go through unpaid summer internships to get the chance to get a good job. There is no minor league system in football, where players who are good enough basically use their time at college as a way to showcase their talents to NFL scouts. If you are good enough, leave early. You can always play in the Canadian league if you want to get paid straight out of high school, however, playing at a major football college still remains to be the best paid internship in the world.

3.  Another argument that the student athletes do not get to share in the profits they generate. This is true for everybody in the US. If I work for any company and I generate business for them, I do not get more money from the sales of that contract unless it is part of the contract I signed. If I am in intern and help generate business for the company, I won’t get any bonuses.

4.  His father committed the crime, not Cam, so he is a victim. I find this one laughable. First off, Cam Newton starts off with some character issues from his time at Florida. Initially, this story was blown off because his father was a minister and there was no way he could do such a thing. Well that turned out to not be true. Then they said he never told his son. If the son was talking to coaches, I find it impossible to believe that the son and father were not on the same page.

…..     I do have a few frustrations with this whole thing and mainly because they never seem to work in my teams favor:

1.  AJ Green was suspended for 4 games for selling his jersey for $1000. Why wasn’t he given the option of repaying the amount as many students are allowed to do instead of sitting out 4 games. Why didn’t the media rally around him?

2.  Why does Georgia always preemptively suspend guys before the NCAA rules on it. I’m still upset that the UGA basketball team was pulled out of the SEC tourney and therefore ineligible for the NCAA tourney. We had a great team that year and I think we would have made a good run. Then it turned out to be a very minor issue when all the smoke cleared. I would rather play things out and have them taken away from us rather than eliminate our chances from the beginning.