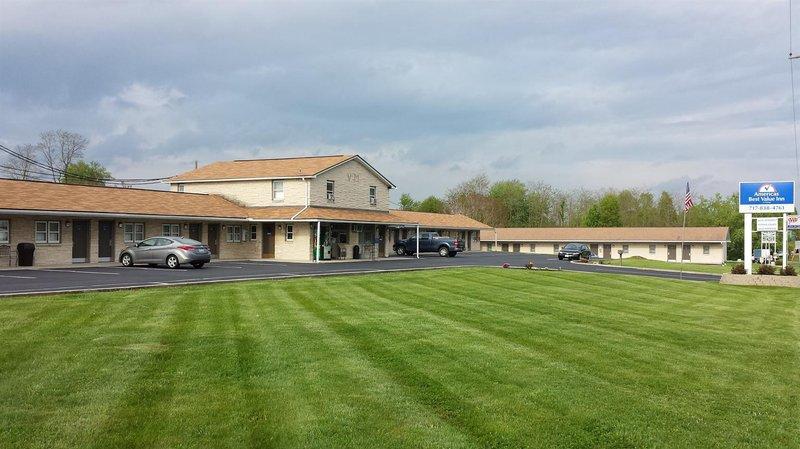 Since we could not get another night at the Best Western in Harrisburg, I wanted something close to Hershey Park since we were going to the Park on Wednesday and didn’t want much of a drive in the morning and at night after being tired.

Got to the hotel early after finishing up in Paradise and Intercourse. For some reason our GPS wouldn’t accept the address number so we drove to the general area and had to look for it which took an extra minute. Parking was easy, as it looking relatively empty. Checkin was fast and easy and the staff at the front was extremely friendly.

Parked right in front of our room and unloaded our stuff and relaxed for a few minutes. First impression was that the rooms were huge so there was plenty of space for us and the bags. The bathroom however was the opposite, not much counter space, just a little shelve about the sink. Not a huge deal though.

The kids wanted to swim so we headed off to the pool which is outdoors. We took towels from the hotel room which was good because they didn’t have any at the pool. I decided not to swim as did Hibah for no good reason. The pool temperature was ok as it was around 90 outside. It is a rectangular pool with stairs to enter the shallow end. Plenty of poolside seats to watch. After a few minutes, Hibah changed her mind, ran back to the room, changed into her gear and went swimming. They swam for over 1.5 hours and then back to the room, for a shower, some tv, and off to bed.

There were plenty of towels in the room. Because we were in and out so much and it is a motel, there were a few flies in the room. I don’t blame the hotel for this but you need to consider it because there are generally lots of flies in general in the summer and they have direct access inside with a motel room. Any exposed skin at night and they were going to get on you while you slept.

The beds were comfortable and I like that that the microwave had a clock on it along with the standard bedside clock. We all slept well. We forgot breakfast ended at 9:30 on Tuesday which is when we showed up as we drove the 5 miles to Hershey Park. Instead we got breakfast at Dunkin Donuts right outside the park.

It was nice that the park was close when we got out at 10pm as we were dog tired. We grabbed some McDonalds on the way and then slept right when we got home. Next morning we all grabbed breakfast. The selection wasn’t great, but was good enough. It is in the main check in lobby in a tight area and there is no seating area. Kids grabbed some fruit and cereal (they have a waffle maker) and we headed off. Checkout took 5 seconds and again the staff was super friendly. We packed out stuff and were off to York.

Overall: I would stay again although the Best Western in Harrisburg (Best Western Premier The Central Hotel & Conference Center) was only slightly more in cost and was better so if both are available I would take the BW. I paid $239.74 (total includes taxes) for 2 nights.