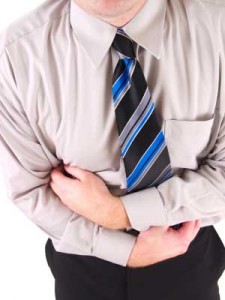 I woke up around 8am with a bad stomach ache. I knew this was not a good sign so I tried to sleep it off. Around 9am, I heard some grumbling in my stomach. I thought maybe I was hungry but it did not feel good. I high tailed it to the toilet. Oh, it shot out like the bullets of the AK 47 into the toilet. I wiped up and hoped the worst of this diarrhea was over. Forget rice stool, this was pure liquid. A couple hours later I raced back to the toilet again. Some more AK 47 firing but this time it also included some nasty tasting burps with the distinct taste of Kudayi (sp?) chicken which I ate yesterday. Some sniper fire came out of my mouth, it was painful. I, fortunately, leaned over into the bathtub so I’m firing into the toilet and bathtub simultaneously. The vomiting lasts for a few seconds but I don’t feel much better and the burps start again so I launch some more sniper fire as I stare into the previous sniper fire and can see distinct pieces of chicken. Surprisingly, it does not smell as appealing as it did when I initially ate it. Again it lasts a few seconds. I’m in severe pain at this point. I cannot remember the last time I puked and I had forgotten how much I hate it. Diarrhea, I can handle, it’s an inconvenience and limits your mobility but is effortless, just sit back and relax. Vomiting on the other hand really takes a toll on you. Uses lots of muscles, prevents you from breathing for a few seconds, leaves a horrible taste in your mouth. At this point I was hoping I passed out. I was sweating profusely and it came so suddenly. The last time I remember breaking into sweats so quickly was when I saw a rat in our place in Austin, TX. I am not sure which scenario I prefer. So all the while the AK 47 is on rapid fire with seemingly no end in site with intermittent sniper fire. One last sniper fire erupted and apparently it hit the target. The burps stopped and there was no movement in enemy territory so the AK 47 firing also stopped in conjunction. I sat on the can for a few minutes, exhausted. I thought about showering but then thought about all the puke in the shower. I thought about brushing my teeth but I didn’t have the energy so I stumbled over to the bed and fell asleep

A couple hours later around noon, I hear some enemy troops arming themselves so I head back to the toilet and commence AK47 firing to finish them off. Since there are only a couple of them, the AK47 firing is short and sweet and no sniper fire is needed. I stumble back to bed and go back to sleep.

A couple hours later I wake to a phone call from Jawad. He invited me to lunch but I notified him of my illness so he understood when I declined and offered to bring over whatever is needed and also said he will tell the hotel staff to do the same thing. Bhutta uncle called later and I told him too. He called Jawad and told him to drop off some cipro and some electrolyte powder. I took the meds, watched some more of the Office and drank lots of water with the nasty powder in it along with some 7up.

Later that night, when the room service guy delivered some 7up, they asked if I would switch rooms to accommodate a family gathering which wanted the whole floor. I gladly said yes but warned him he would need to clean the tub as the vomit was still there plus since I was ½ a level below the ground floor I was far from the router so the internet connection was slow. I hope he remembered to clean the tub. Suckers.

1. The chicken tasted good on the way in on Friday, although, I should have known my weak American stomach could not handle the pool of grease in it but it was a celebratory meal and since I technically could taste it on the way out, I can count it as enjoying it twice.

2. If anyone asks when the last time I vomited, I can say definitely that it was Saturday, July 11th 2008, in Islamabad, Pakistan.

3. If anyone asks which I prefer: vomiting vs Diarrhea I can definitely say I prefer Diarrhea.

4. The timing was perfect.

a. It happened after all the adoption stuff was taken care of so it did not affect any of my business. I am not sure how the judge would have reacted had I puked in his hot steamy office. Perhaps that would have gotten his sympathy, we’ll never know.