After spending a month working in Greensboro and living with my good friend, Suresh, and his family, I finally got to go home. Since I was driving, and hate driving, I figured I would try to make as exciting as possible.

After praising Greensboro for never having any traffic even during rush hour, I was unpleasantly in a traffic jam halfway from Greensboro to Winston-Salem. If you look on the map, there is only about 20 miles between the two cities so I did not make it too far. This was a Sunday around 11am. I was stuck, not moving for about half an hour. I think I saw an ambulance way up front somewhere so no complaints. 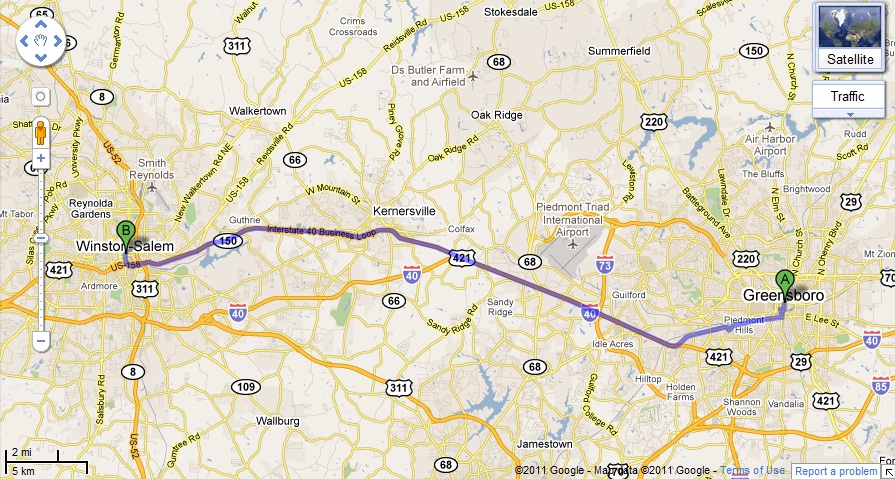 Once I started moving again, I remembered seeing a funny-looking mountain on my drive-in so I decided to step there. I got off the highway and drove towards it. I wasn’t sure how close you could get but I figured I would try. After driving around a city for about 20 minutes, I saw a park entrance at the base of the mountain. It also looks like if I would have been patient, I could have gotten off the highway right near this entrance instead of going through this city. So I drove to the top of pilot mountain and parked in the parking lot. Looked at the map and figured I would go on the intermediate cliff trail that was 2.2 miles. I probably should have paid attention to the color markers because I did not realize that I had to know which color was for my trail as the various trails split from each other. I also did not realize I was taking the less steep part on the way down and the amazingly steep part on the way up. The whole time I was in North Carolina, it never went above 30 degrees. Ice and snow were the norm. Today, as I was leaving, it was in the 50s. I wore my winter coat on the trail just in case. That was a mistake: my heart was pounding and my sweat was pouring. If I had any cardiac disease, I would have died. I thought I was lost but I eventually made it. The temperature gauge indicated 67.

I needed a rest so next I drove to Mount Airy which is home to Andy Griffith and serves as a sort of Mayberry. I went to the Andy Griffith Museum which gives you a joint admission to the Siamese Twin Museum and did not really make any sense. I looked at some of the old buildings and took a nap in my car.

I drove without a map or GPS hoping to remember my way home. West Virginia was uneventful as was Virginia. Indiana was boring as well and then I got close to Columbus. I could not remember what I needed to take. 71 sounded familiar so I took it. After a few miles I only saw signs for Cleveland which I knew was the wrong way. I needed to go Northwest, not Northeast. I was hoping to see a major highway that crossed 71. After about 1 hour I decided to take a local small towny road that headed West. It was dark and and I was on some smaller roads with no assurance I was really still heading east. Eventually, after driving around trying to line up the eastern direction by the stars, I ended up on Hwy 30 which was a proper highway. It also was headed East and mentioned Toledo which is where I wanted to go. Eventually it met up with 23, which is when I realized that is what I was supposed to take out of Columbus. I stopped for coffee at a gas station and got some gas, the rest of the drive was boring and slow. Eventually I made it Okemos at 2am, kissed my sleeping children, and went to bed.